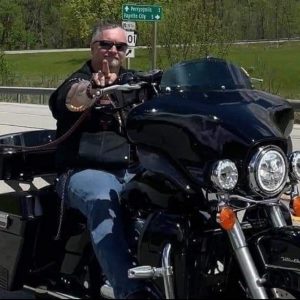 John A. Wilson, 54, of Georgetown, PA passed on Wednesday, May 18, 2022, at Ruby Memorial Hospital Morgantown, W.V. from injuries sustained in a motorcycle accident on Sunday. Born November 30, 1967, in Cannonsburg, he was a son of the late David P. Sr. and Peggy Jo (Frazier) Wilson. John had worked as a human resource officer for the United States government, he retired from The United States Marine Corps as a Gunnery Sergeant (E7) after 20 years of honorable service. He served in Operation Desert Shield/Desert Storm in 1990 and Iraqi Freedom from 2003 until 2006. He was awarded the Purple Heart and Navy Commendation Medal for his heroic action on the battlefield in addition to over 25 other distinguished service awards, also including the Combat Action Ribbon.

At John’s request there will be no viewing or conventional service, but rather a gathering of friends to celebrate his life to be announced at a later date on Facebook. Memorial if desired can be made in his name to the Hookstown American Legion Post # 952 1265 Route 168 Georgetown, PA 15043.

John’s last act of giving was that he was an organ donor, donating any viable organs to help give a better quality of life or life itself to those needing them.