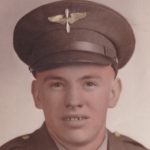 Born Jan. 5, 1923, in Hookstown, he was the last surviving child born to the late Harry and Sarah (Morrow) Hughes. He was a retired fitter with U. S. Steel and a veteran of the U.S. Army serving as a Corporal during World War II. He was a member of the Bethlehem Presbyterian Church, where along with being a caretaker of his church, he was also an Elder. He was a member of the Monaca American Legion, active Boy Scout leader, and he, along with his late wife, Helen, took in and worked with foster children serving as foster parents.

In addition to his parents, he was preceded in death by his wife, Helen B. Tressler Hughes; a son, Howard “Buddy” Hughes, in 1991; three brothers, Henry, Murray, and Lloyd “Jim” Hughes; sisters, Marjorie Hughes, Hazel Kennedy and Jeannette Hughes.

Family and friends are welcome to call at the MCCONNELL FUNERAL HOME, 447 Pine St., Hookstown, PA 15050, on Tuesday from 4 to 8 p.m. where services will be held Wednesday at 10 a.m. with the Rev. Robert W. Kennedy of the Bethlehem Presbyterian Church, Shippingport, officiating.

He will be laid to rest beside his wife in the John Anderson Memorial Cemetery, with full military honors.

Member of the Beaver County Special Unit will meet at the cemetery at 12:30 p.m. to conduct military honors.