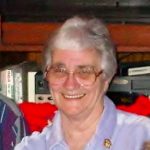 Evelyn Douglas, 88, of Aliquippa, (Raccoon Twp.), died Friday afternoon, March 2, 2018, under the compassionate care of the Good Samaritan Hospice Group, Beaver, and her family being at her side.

Born August 13, 1929, in Clendenin, W.Va., she was a daughter of the late Walter and Anna (Welch) Hunt. A homemaker, she was a member of the Calvary Baptist Church, Monaca, a retired licensed practical nurse, a member of the Appalachian Folk Music Club and had a great love of music, poetry and crafts, especially crocheting.

In addition to her parents, she was preceded in death by her beloved husband of 64 years, Hartsel Dale Douglas, on August 31, 2011, and one sister and three brothers.

Family and friends are welcome to attend her memorial visitation on Saturday, March 10, 2018, at the MCCONNELL FUNERAL HOME, 447 Pine St., Hookstown, PA 15050, from 1 p.m. until service time at 3 p.m. The Rev. Richard Grassel of the Conway Alliance Church will officiate. She will be laid to rest alongside her late husband in Union Cemetery, Monaca.

Memorials in her name, if desired, can be made to the Good Samaritan Hospice Group, Beaver.

The family extends their heartfelt thanks to the staff at Beaver Valley Health and Rehab Center and the folks at Good Samaritan Hospice, Beaver, for all the love, care and compassion extended to them and their beloved mother.