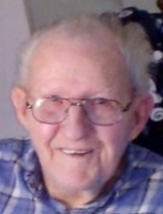 Born February 5, 1918, in Christmas, KY, he was the last surviving child born to the late Fred and Alma (Burchett) Chaffin. Mr. Chaffin was a member of the Hookstown Free Methodist Church, and was a veteran of World War II having served in the U.S. Army and receiving many awards for his service. A member of the Hookstown American Legion, he retired in 1975 from U.S. Steel. He had played guitar and sang since he was a teenager in Kentucky and enjoyed entertaining family and friends at Fox’s Assisted Living in Chester, WV.

Family and friends are welcome to call at MCCONNELL FUNERAL HOME, 447 Pine St., Hookstown, PA 15050, Daniel M. McConnell, Owner-Director, on Thursday from 2 to 4 and 6 to 8 p.m., where services will be held Friday at 10 a.m. with Jim McMasters officiating. He will be laid to rest beside his late wife in Mill Creek Hill Cemetery, Georgetown.